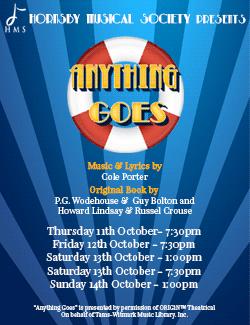 Aboard the ocean liner S.S. American, nightclub singer/evangelist Reno Sweeney is en route from New York to England. Her pal Billy Crocker has stowed away to be near his love, Hope Harcourt, but Hope is engaged to the wealthy Lord Evelyn Oakleigh. Joining this love triangle on board the luxury liner are Public Enemy #13, Moonface Martin and his sidekick-in-crime Erma, as well as Billy's boss Elisha Whitney and Hope's mother Evangeline Harcourt. With the help of some elaborate disguises, tap-dancing sailors and good old-fashioned blackmail, Reno and Martin join forces to help Billy in his quest to win Hope's heart in this classic musical comedy! Cole Porter's score features some of the theatre's most memorable standards, including 'You're the Top', 'I Get a Kick Out of You' and, of course, 'Anything Goes'.

All ticket holders under the age of 18 must be accompanied by a paying adult.

Brought to you by

For all ticketing enquiries or if you've any query regarding your purchase please contact our support team at:

10am to 5pm Tuesday to Saturday